Chia seeds containing nearly 5 times more calcium than milk, and 3 times more iron than spinach, Chia Seeds are an ancient natural food and a leading modern day “superfood”. Originating from the South American herb the chia plant also known as the chia sage is a member of the mint family. Traditionally Chia Seeds formed a core part of local cuisine as flour, cereal and mixed in drinks. Enriched with a plethora of useful proteins and vitamins, Chia Seeds also embody large quantities of omega 6 and 3 fatty acids. Chia Seeds boast an affluent nutritional profile with approximately 20% protein and more Omega-3 fatty acids than any other plant, including flax seeds. Chia Seeds are carefully extracted from the salvia hispanica and selected for the highest quality. These are cleaned in natural water and packaged in their raw state.

Chia seeds – why should you include it in your diet?

They are classified as superfoods, i.e. functional foods that have a positive effect on health.

– help in the fight against insulin resistance and diabetes

– support the work of the brain

– have a positive effect on eyesight. 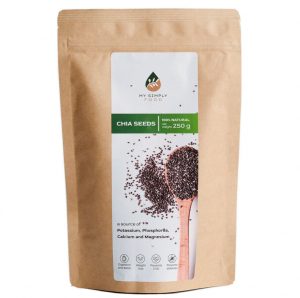 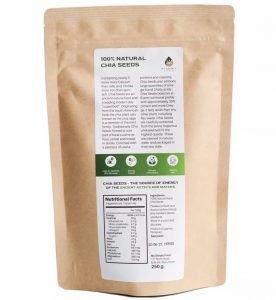 There are no reviews yet.

Be the first to review “100% Natural Chia Seeds” Cancel reply

We use cookies on our website to give you the most relevant experience by remembering your preferences and repeat visits. By clicking “Accept”, you consent to the use of ALL the cookies.
Cookie settingsACCEPT
Manage consent

This website uses cookies to improve your experience while you navigate through the website. Out of these, the cookies that are categorized as necessary are stored on your browser as they are essential for the working of basic functionalities of the website. We also use third-party cookies that help us analyze and understand how you use this website. These cookies will be stored in your browser only with your consent. You also have the option to opt-out of these cookies. But opting out of some of these cookies may affect your browsing experience.
Necessary Always Enabled
Necessary cookies are absolutely essential for the website to function properly. These cookies ensure basic functionalities and security features of the website, anonymously.
Functional
Functional cookies help to perform certain functionalities like sharing the content of the website on social media platforms, collect feedbacks, and other third-party features.
Performance
Performance cookies are used to understand and analyze the key performance indexes of the website which helps in delivering a better user experience for the visitors.
Analytics
Analytical cookies are used to understand how visitors interact with the website. These cookies help provide information on metrics the number of visitors, bounce rate, traffic source, etc.
Advertisement
Advertisement cookies are used to provide visitors with relevant ads and marketing campaigns. These cookies track visitors across websites and collect information to provide customized ads.
Others
Other uncategorized cookies are those that are being analyzed and have not been classified into a category as yet.
SAVE & ACCEPT